Both for humans and living creatures in general, one of the most attractive elements en the landscape is water. Bodies of water and the riverside vegetation surrounding them are unique sites within the landscape, enjoying their own peculiar environmental conditions. They can be classified as “biogeographical islands”, which allow for the introgression of plants and animals that are typical of regions with high rainfall to more arid climes (Alvaréz Nieto A. et al.). 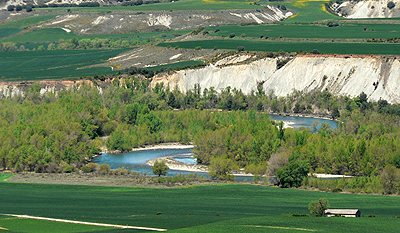 Edaphohigrophyllous vegetation typically found alongside rivers creates its own particular landscape, marking out very distinct long, narrow strips of land, which divide and yet at the same time connect various areas in the region. In the hertlands the environmental conditions defined by parameters such as temperature and humidity remain fairly stable. This characteristic turns them into wildlife corridors, that is to say, migration and dispersion routes for animals and plants.

Birds are without question the easiest wildlife to see on our riverbanks as the riverside woodland is a place that offers an abundance of food almost all year round. In addition to the “real” water birds such as herons, Kingfisher and Dipper, we also find other species of birds from woodland or adjacent zones that seek out these areas for refuge and plentiful supply of food and water. In spring the birds inhabiting the region are occupied with breeding activities. The changeover takes place in late summer, on the one hand, after breeding some species migrate south and return to Africa. On the other hand, there are other species that arrive on the scene, such a Robin, White Wagtail, flycatchers, starlings, buntings, thrushes, pipits and Chaffinches. Riverbanks are fundamentally inportant for these birds during their migration since they use such places to rest and feed when flying over semi-arid grass and farmland.

The banks of the River Aragon in La Jacetania offer a privileged spot for birdwatching.