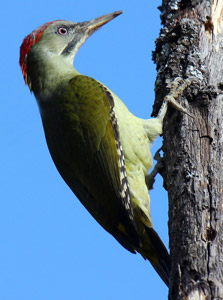 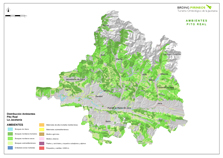 DESCRIPTION: Noted for its large size and green plumage on its back, yellow rump and red crown. Its low-level undulating flight is also quite distinctive. It is a member of the woodpecker family Picidae.

DIET AND FEEDING: It is normally found on the forest edge near open country. It feeds on ants, which it catches either on the trees or on the ground thanks to its long tongue, being a real expert at poking about in ant hills and termite mounds.

HABITS: The Green Woodpecker is the most common and widely distributed woodpecker in La Jacetania, occupying all types of woodland up to altitudes of 1800 metres. It is a sedentary species that spends the whole year in the same territory.