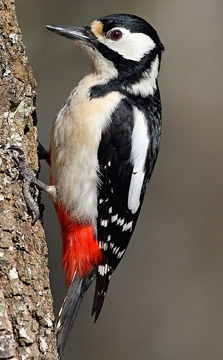 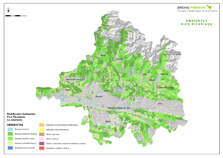 DESCRIPTION:
The Great Spotted Woodpecker is one of the most common woodpeckers and is found all over Europe. It has a white belly with a red patch under the tail, without any bars. The female does not have the red patch on the nape which is characteristic of the male. Its call is short and repetitive. It is prone to short, sharp drumming on trees and branches.

DIET AND FEEDING: It uses its long bill to search for insects and larvae in the bark of trees, which making up a large part of its diet. With the harsh winter, all the insects disappear, leaving it to feed on acorns and hazelnuts and occasionally boring holes in tree trunks to extract the sap.

HABITS: It has an extensive habitat since it can work with many types of wood. Hence, it can live in any type of woodland, from low altitudes to the highest limits of the forest cover. It builds its nest inside a hole bored in the tree trunk by both male and female round about the month of May. The chicks begin to leave the nest in mid-July.