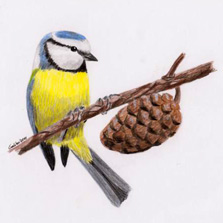 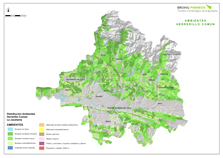 DESCRIPTION:
The Blue Tit is similar to the Great Tit, although it is easily recognisable due to its smaller size and the light blue colouring on its head, wings and tail. It is the only member of the tit family that has a bright blue crown.

DIET AND FEEDING: The Blue Tit lives in leafy, mixed woodland, and is commonly found on the thinner branches of the trees. It feeds on insects and seeds and makes use of artificial larders in winter. HABITS: It builds its nest at altitudes of up to 1600 metres, showing a preference for such heights in summer and autumn. In winter, it drops to lower areas, and can even be found in small stands of woodland and among the reeds and rushes. When it comes to roosting, the Blue Tit fits nicely into nesting boxes.

HABITS: It is associated with coniferous woodland (Scots pine, black pine, fir trees). and has a warning call that is distinctive, with a cheerful, bubbly trill. It makes its nest inside holes in the trunks and branches of trees from moss and spider’s webs, with a woven inner lining of feathers and wool. Each year it builds a new nest.