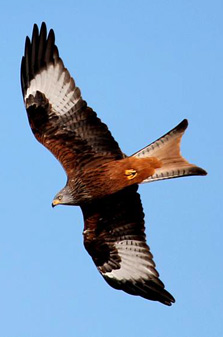 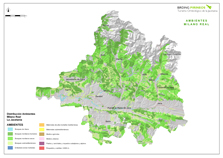 DESCRIPTION:
Mid-sized bird of prey, with a light, agile flight much like a toy kite. A long, forked tail, which is easily recognisable in flight (in the shape of a Y), and wings with white markings that are very noticeable from below. Scavenging and opportunistic by nature, the Red Kite tends to take up residence near human activity. Established pairs are joined by a great many other birds that winter in Germany and France and set up communal roosts in riverside woodland areas.

DIET AND FEEDING: They are tremendously eclectic in their eating habits, with a diet ranging from carrion to rodents, small sick mammals, amphibians, reptiles, insects, etc. They can also be found foraging on rubbish dumps, dungheaps or farms in search of scraps of food.

HABITS: The courtship games displayed by the male and female are very striking with all their spinning, windmilling, and spiralling down towards the ground. They build their nests in large trees that have been known to measure up to a metre in diameter. The eggs are normally incubated by the female, with sporadic help from the male. The chick leaves the nest about three months after hatching.