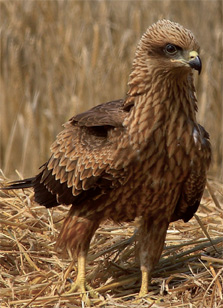 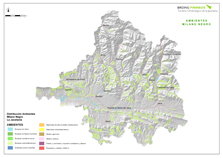 DESCRIPTION:
A close relative of the Red Kite, the Black Kite has a darker plumage, with a less pronounced fork in its tail. It also has different habits since it only visits this region from February to August, preferring to winter in Africa. During the summer it forms large colonies, consisting of hundreds of birds.

DIET AND FEEDING: Eclectic where feeding is concerned, although it is not a skilful predator. It likes to be near any human activity that generates an easy source of food and can therefore be found foraging tirelessly on farms, roads and rubbish dumps.

HABITS: Black Kites always live near bodies of water, searching for more wooded areas in which to build their nests during the breeding season. They are real scavengers, and are expert at snatching food away from fellow kites or other species that eat similar food. Gregarious by nature, the Black Kite usually breeds in fairly large colonies or near other mating birds with whom it shares the same space.