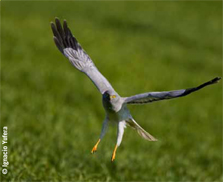 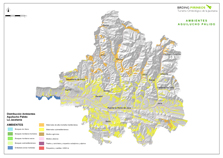 DESCRIPTION:
Smaller than the Marsh Harrier, the male is pale grey above and white underneath with black wingtips. The plumage of females and juveniles is brown, which is dark on the upperparts and paler below. It has a low rate of reproduction, with numbers increasing in winter with the arrival of other birds from more northerly latitudes, which gather at night in colonies in wetlands and amongst the reeds.

DIET AND FEEDING: It hunts small and medium vertebrates, different birds, reptiles and some large insects

HABITS: During courtship, the male and female go through some stunning acrobatic routines. The nest is built on the ground amongst dense vegetation.