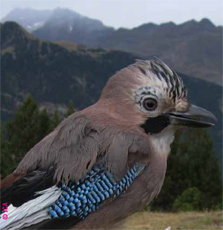 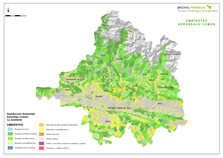 DESCRIPTION: This attractive bird belongs to the family of crows and is well adapted to the forest. The bird has a pinkish brown plumage, with a black moustachial stripe, wings and tail in black and white and a striking turquoise blue on its shoulders, which is only visible at close quarters. The Jay acts as the voice of alarm in the forest, emitting a harsh, rasping screech warning of any predator it sees, including human beings.

DIET AND FEEDING: From March to September its diet is primarily composed of insects and is supplemented with the eggs and chicks of other species. Throughout the rest of the year, the Jay eats chestnuts, acorns and wild roses. If it approaches urban areas it usually feeds on the organic waste left at waste dumps.

HABITS: In autumn it usually buries acorns, nuts and beechnuts for use as a larder during the winter. This habit contributes to the expansion of woodland areas.