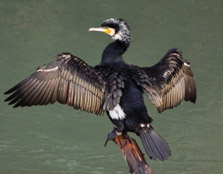 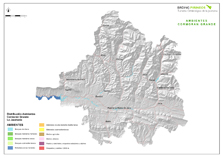 DESCRIPTION: A bird that is easy to distinguish since it flies with its neck extended. Its plumage is generally black, with the exception of its throat and breast. Juveniles are brownish-black with off-white underparts. In spring adult birds have a white patch on their cheeks and thighs. When swimming, it keeps much of its body underwater. Its call is a very deep guttural croak.

STATUS IN ARAGON: I (Winter visitor)

DIET AND FEEDING: The Cormorant is an expert diver when it catches fish.

HABITS: It nests in the northern half of Europe and usually winters in the region of the Mediterranean  and the rivers of the Pyrenees. It normally spends the period from October to April in La Jacetania. Cormorants form colonies on trees, which can be affected, and even die, due to the toxic content of their droppings. It is common to see them resting on the shoreline, with their wings extended to dry them in the sun, perching on rocks, river banks and branches in the trees. On occasions, they form groups to hunt and rest, setting up their roosts in winter.