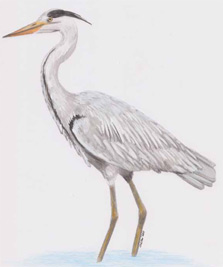 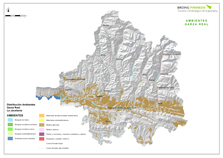 DESCRIPTION: The Grey Heron is distinguishable thanks to its large size and distinctive plumage. In flight, the bird’s neck is always pulled back in the shape of an S, and it engages in an incessant, slow, heavy beating of its wings.  It is common to see its motionless profile on the river bank waiting to catch a fish at great speed in its strong beak.

DIET AND FEEDING: It tends to haunt wide rivers, lakes, canals and all types of bodies of freshwater, whilst also frequenting farmland to forage for food. Its diet is  based on fish, frogs, small mammals, crustaceans and insects.

HABITS: The Grey Heron is the most widely distributed wading bird in Europe. Although this species mainly visits La Jacetania in the winter, some individuals remain throughout the entire year. In autumn they usually arrive from the north and stay until March or April.