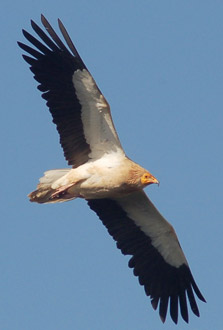 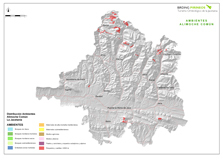 DESCRIPTION: This is the smallest member of the vulture family. During flight, adults appear to be white with black flight feathers in the wings and yellowish heads. Juveniles have dark brown plumage, which gradually lightens as they mature in age.

DIET AND FEEDING: The Egyptian Vulture feeds on small and mid-sized carrion (such as chickens and rabbits) and the remains of large animals left by other vultures. At carrion food sources or feeding stations, it is the last to eat, waiting until the larger scavengers have had their turn. In Africa, it eats ostrich eggs by cracking the shell with pebbles, which it tosses repeatedly until the egg opens.

HABITS: Its migratory habits enable us to see it in the Pyrenees from March to August or September. It nests on rock faces. In summer it sometimes gathers in communal roosts. Between March and April, two eggs are laid in a nest lined with animal hair (sheeps wool is often used), twigs and bones. Egyptian Vultures carry these materials to the nest in their beak - unlike other vultures, which hold them in their claws.

SPATIAL DISTRIBUTION: Cliffs and crags at an altitude of less than 2000 metres.