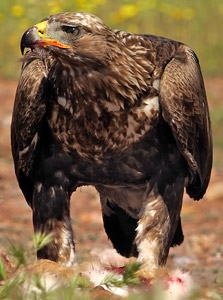 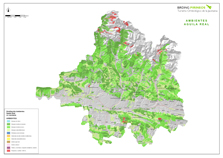 DESCRIPTION:
Large raptor with long wings and tail, and with a mighty flapping flight number followed by a glide of seconds. It differs when planning because it keeps the wings slightly raised in a V. In flight, the underside of adults is dark brown and young people the same but with white patches on the wings and tail.

EATING HABITS: He lives in uninhabited areas, preferably in mountainous areas. His thick beak and strong claws allow you to hunt all kinds of birds and mammals of medium size such as squirrels, rabbits, hares and marmots. It also feeds on carrion.

LIFE AND CUSTOMS: Builds a large nest of small sticks. In this area of the Pyrenees, which usually build on the ledges of the cliffs, and rarely in the canopy of large trees. It is sometimes difficult to see because it spends much time perched on the rocks or a tree, but in early spring we contemplate doing aerial displays in which the male takes the female simulated attacks drop while in flight.