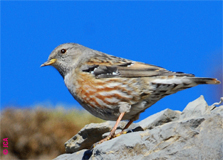 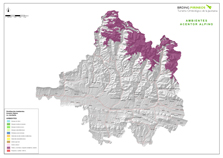 DESCRIPTION:
A plumpish bird with grey plumage, capable of powerful rapid. Up close, the pale spotting on its throat is clearly visible, along with the reddish-brown streaks on its flanks. The Alpine Accentor is found at high altitudes, whose summer haunts include even the highest peaks. Considered to be a partial migrant, in winter it moves to lower latitudes in the same region.

DIET AND FEEDING: The Alpine Accentor feeds on insects and to a lesser extent, on pine kernels and fruit during the colder months of the year when it can often be seen hovering over the snow in search of insects trapped in the ice.

HABTIS: Rocky areas and stony outcrops, in patches of creeping shrubs, or near  mountain refuges and ski resorts, without appearing to be frightened off by human presence. It builds its nest in holes in the rocks or in small fissures using roots, grass and leaves.