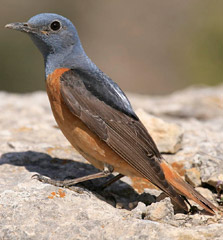 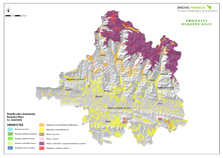 DESCRIPTION: A medium-sized thrush with a stocky appearance. A male can be seen in the picture,  The female is dark in colour and mottled. Both birds have a reddish tail.

MONTHS : May to august.

DIET AND FEEDING: It mainly lives in sloping alpine meadows, and lower areas with rocky crevices and thin vegetation, feeding on insects, other small animals and also berries.

HABITS: The Common Rock Thrush can be found in the mountainous regions of central and southern Europe. In the Pyrenees it nests at altitudes of up to 2500 metres, and is found in greater numbers in the inner mountain ranges, avoiding the valley floor. Between April and May the birds fly back from Africa to spend four months in this part of the Pyrenees until they are ready to fly off again in August. The male can be heard singing from its perch until the end of June. In mid summer families can be seen with their fledgling chicks, foraging for food on the ground.