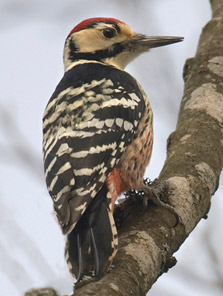 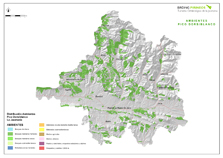 DESCRIPTION:
The White-backed Woodpecker can be distinguished from the Great Spotted Woodpecker by the pattern on its back, which has white horizontal bars without the two huge vertical white patches. The male has a red crown, and barred underparts with a pinkish tinge. It has a similar call, though somewhat longer and slower. Its frequent drumming starts out very loud and then softens as it speeds up towards the end.

DIET AND FEEDING: Insects, larvae and occasionally fruit and berries.

HABITS: The least common of the woodpeckers and one of the most highly threatened birds in Europe, due to the fact that it only inhabits mature woodland enjoying efficient conservation with an abundance of dead wood. In Spain it is only present in the woodlands of Gamueta (Huesca) and in Irati (Navarra).