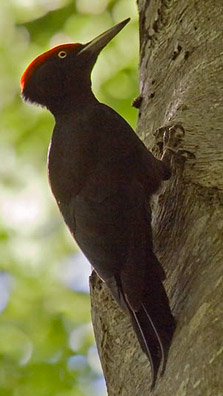 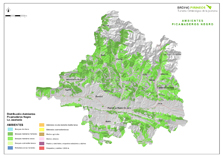 DESCRIPTION:
The Black Woodpecker is the largest of the European woodpeckers. Its huge size and uniform black plumage make it easy to recognise. The male has an entirely red crown, while the female only has a red patch on the hindcrown. Its wuck-a-wuck-a-wuck-a call can be heard from a great distance. Its drumming is extremely powerful and audible from a long way away.

DIET AND FEEDING: The Black Woodpecker is found in extensive woodland with old mature trees, on conifers and deciduous trees alike. It feeds on insects, particularly ants, and other small animals that can be foraged from the dead wood.

HABITS: It perches on tree trunks and the thickest branches, and bores a hole to enter its nest, which measures 9 x 12 cm. It often drums on the bark, especially in the spring to mark its territory. It lives in Europe in cold and temperate regions, with the Pyrenees forming its southern boundary. In La Jacetania, it is a sedentary bird inhabiting mature woodland areas at altitudes of up to 1800 metres. San Juan de la Peña has several pairs and a higher density than the rest of the Pyrenees. It nests in hollows inside mature trees at quite a considerable height off the ground. The hole is chiselled out by both the male and female bird. The chicks leave the nest within a month of hatching.