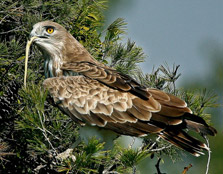 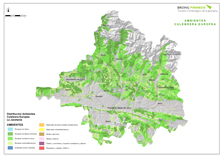 DESCRIPTION: Large pale bird of prey with broad wings and quadrangular tail. The Short-toed Eagle is present in Spain from March to September and winters in Africa, adapting its migratory pattern to its diet based on reptiles. It hunts from its perch (on rocks, branches, telegraph poles, etc.) and often in flight, hovering motionless for long moments thanks to the powerful beating of its wings. When mates reach their own territory they go through some spectacular courtship dances in the air, sending out a profusion of shrill, plaintiff calls.

DIET AND FEEDING: The Short-toed Eagle has the peculiar habit of feeding almost exclusively on a prey that is scarce and difficult to hunt: ophidians (snakes). However, it also eats other reptiles, amphibians and small mammals that it finds thanks to its wonderful sense of sight. It swallows such food after making it smaller by pecking at the head and nape of its prey.

HABITS: The Short-toed Eagle builds its nest in the branches of trees, and often re-builds the one from the previous year if it has been able to locate its former mate. At the end of April one white egg is laid, which is incubated by both the male and female bird. The chicks does not leave the nest until the month of August.