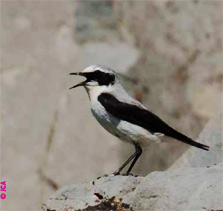 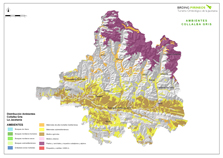 DESCRIPTION: Long-distance migrant, returning to La Jacetania each spring from its winter quarters in Sub-Saharan Africa. The male has a very striking black, white and grey plumage, especially in its tail, while the female has an ochre or pale brown colouring without the black face mask. The Wheatear occupies open spaces, such as pastures and meadows with rocks on which it can perch. It starts to call out with a chack noise as a warning when approached too close to its territory.

HABITS:The Wheatear lives in open country occupying a large variety of habitats. In early March it arrives at its breeding grounds from Sub-Saharan Africa.