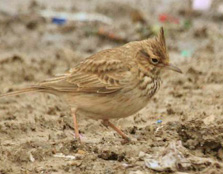 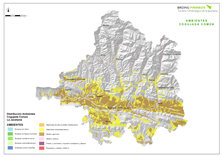 DESCRIPTION: Very long, thin beak and spiky erectile crest. Greyish-brown colouring on upperparts and lighter streaking on its breast and flanks, with off-white underparts. It usually sings on the ground or perched on heaps of stones, in bushes, etc. The Crested Lark lives at the edge of roads and trails, on farms or on the outskirts of towns and villages. Its song is melodious and high-pitched.

DIET AND FEEDING: Invertebrates, seeds, leaves and shoots. It is common to see it foraging for seeds in the faeces of other animals such as horses.

HABITS: A ground-nesting bird, with both sexes taking part in rearing the chicks.