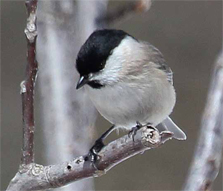 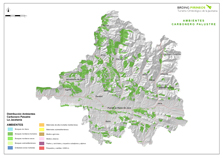 DESCRIPTION: A bright black crown and a small black “bib” with white cheeks. The brown colouring on its wings is also very even and typical of the Marsh Tit, which lacks the characteristic white edges displayed by the Coal Tit or Great Tit.

DIET AND FEEDING: The Marsh Tit feeds on the insects it finds crawling on the bark of trees and also on seeds, and is possibly the member of the tit family Pardae with the most vegetable components in its diet.

HABITS: Despite its name, it does not frequent marshy areas (wetlands, lakes and tarns). It lives in groves of beech and oak, and mixed forests abounding in dry leaves and necromass (dead or decomposing trees), and is forever on the lookout for cool, wet environments.