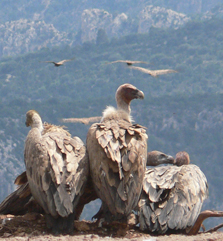 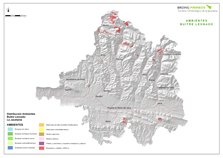 DESCRIPCION: An easy raptor to identify, thanks to its large size and characteristic profile when in flight, with its broad wingspan and short tail. It is cinnamon brown in colour, except for its head,  and its neck which is covered by a whitish ruff.  It has a wingspan of up to 2.5 metres and can weigh up to 9 kilos.  It has a notably long neck covered in down and a powerful beak, both of which are specially adapted to prod and probe the carrion that provides it its food. When seen in flight it is easy to identify because of its long, broad wings and short tail.

DIET AND FEEDING: This is a gregarious bird that gathers in colonies along  rocky cliffs to breed, rest and sleep. It feeds on the carcases of large animals and therefore needs to fly long distances to track them down. The detection of carrion attracts a large number of these birds, which flock to the area.

HABITS: It nests all over La Jacetania to altitudes of 1900 metres, in areas of rock faces close to grazing cattle. The crude nest is usually situated on cliffs, ledges and outcrops, with sticks, straw and wool being used as building materials. Incubation takes almost two months, with both male and female birds taking part in the process. The chick is fed at the nest for a period of up to four months, before leaving it, never to return.

SPATIAL DISTRIBUTION: Cliffs and crags at altitudes of less than 2000 metres.