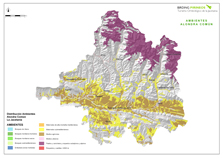 DESCRIPTION: The Skylark has a thin, longish beak, and is streaked on its breast and flanks, and white underneath. The tail is dark and is edged with white feathers. The nail of the back claw is long and straight enabling it to run on the ground. Although a ground-dwelling species, the skylark can sing for lengthy periods while hovering at considerable heights. It makes its home on farm and pastureland.

DIET AND FEEDING: An omnivorous bird which changes its diet depending on the season: in spring, there is a predominance of vegetable grain; in summer  insects; in autumn it lives off the seeds of cereals and weeds; and in winter, off leaves and the seeds of weeds.

HABITS: It usually nests at ground level among low creeping vegetation and crops. In La Jacetania it spends the summer in the cool areas provided by stony outcrops and permanent snow fields, and in winter it is common to see them in the fields of crops along the Berdún Canal.