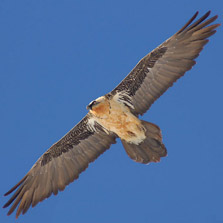 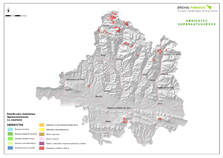 DESCRIPTION: A huge bird of prey with an agile, characteristic profile, with the tips of its wings curving down and a lozenge-shaped tail. Adult birds have rust and white tinges on their head and back, and a black tail and wings. Juvenile birds are dark all over, and go through several moults until they reach adult age. Their wingspan can measure 2.80 metres or more.

DIET AND FEEDING: The Lammergeier nests in small caves in the cliffs. The “Bearded Vulture” is a scavenger, whose diet consists primarily of bones. When these are really large, it grabs them and carries them up to a height to drop them onto a favorite rock, a “bone-breaker”, to be able to swallow them more easily.  It is the only bone-breaking bird on the planet.

HABITATS: In earlier times, it inhabited practically all mountain areas in central and southern Europe. nowadays, the Prynees are its main hideout  It can usually be seen flying in circles, either alone or in pairs, or else patrolling the mountains with barely a flap of its wings. The young fly quite long distances and can even reach other mountain ranges. It spends over half the year occupied with breeding: rutting in autumn, egg-laying and incubation in winter, and the chick's first flight in early summer. It usually lays two eggs, which are constantly watched over by the female, particularly when the chicks hatch, while the male supplies the necessary food. "In general the rate of productivity in this species is very low as half of all pairs that endeavour to breed fail in the attempt and the rest normally only produce one chick" (Seo-Birdlife).

PATIAL DISTRIBUTION: Cliffs and crags at altitudes of less than 2000 metres