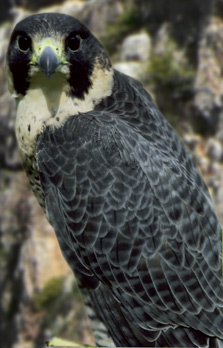 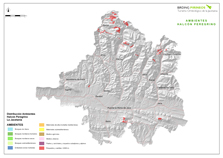 DESCRIPTION:
Renowned for its speed, the Peregrine Falcon has a compact shape, with pointed wings that broaden out at the base. Adults show steel grey colouring in their upperparts, and a paler tail base. They have dark horizontal bars on white on their underparts and a peculiar, black, wide moustache. The female is larger and heavier than the male and juveniles are darker in colour.

DIET AND FEEDING: Extensive foraging grounds away from the cliffs it breeds on, since it prefers to hunt for small and medium-sized birds (ducks, doves and even bats) in open spaces. It captures them by stooping quickly, reaching speeds of almost 300 km an hour, which makes it the fastest diving bird in the world. It kills its prey in the air by tightening its claw and striking it and then catching it before it falls to the ground. Should the prey prove to be too big, it will drop it. Once on the ground, it plucks and eats it.

HABITS: A common species in the Pyrenees that breeds at altitudes of up to 1800 metres. During courtship flights, the male passes a piece of prey to the female in the air, and she flies in the opposite direction to receive the food from the male’s claws. The Peregrine Falcon nests on small ledges or in crevices in the cliffs. It is one of the most widespread birds of prey in the world.