The proposed circuit, which can be done by car, goes through the southeastern part of La Jacetania.

Once we reach Santa Cruz de la Serós, we enter the Paisaje Protegido de San Juan de la Peña y Monte Oroel, a Protected Natural Area of woodland, which is a semi-mountainous region with huge rock faces, where the Atlantic and Mediterranean worlds come together. An interesting variety of cliff-nesting birds take shelter among its rocky crags. If we draw closer, we can see Griffon Vulture, Golden Eagle, Egyptian Vulture, Common Crow, Lammergeier, Peregrine Falcon, Common Rock Thrush, Wallcreeper and Red-billed Chough. The road passes through different stands of woodland within the Natural Area, which depending on whether they are growing in shady areas or are more exposed to the sun, enables different species of birds to make their homes there.

Hence, in the wettest parts of the region, with stands of beech interspersed with fir and Scots pine, it is possible to see Great Spotted Woodpecker, Eurasian Nuthatch, Short-toed Treecreeper, Chaffinch, Black Woodpecker, Common Bullfinch, European Pied Flycatcher, Great Tit and Eurasian Jay. On sunny slopes in the vicinity of Bernués and Peña Oroel, it is holm oak together with stands of oak and Scots and black pine that are most dominant. There is also open country and rain-fed farmland. In these regions with drier vegetation, we find Short-toed Eagle, Subalpine Warbler, Linnet, Corn Bunting, Woodchat Shrike, Long-eared Owl, Red-legged Partridge, Long-tailed Tit, Coal Tit, Common Buzzard and Northern Wheatear. 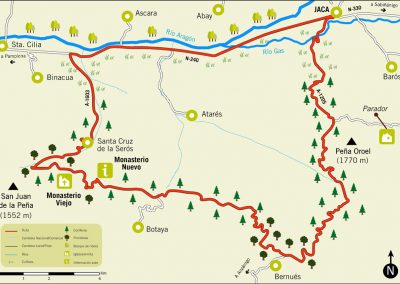 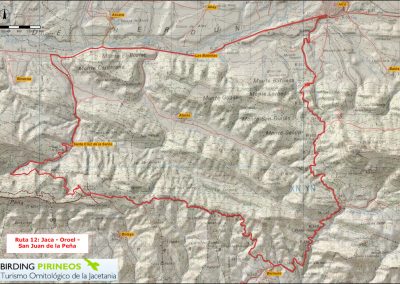