Caves, grottoes, rock shelters, hollows, cuttings, fissures in the rockface… all are the habitat of certain bird species known as cliff-nesting or rupicolous birds. 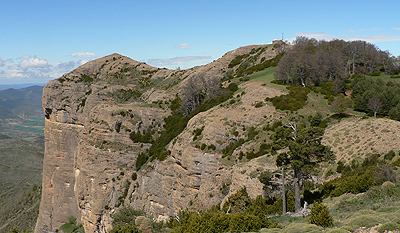 La Jacetania has many optimun sites offering shelter to birds that require this tuype of natural refuge for nesting.

The conglomeratic walss of the synclines dropping below San Juan de la Peña and Peña Oroel provide an ideal place, as do the limestone crags of the Boca del Infierno in Hecho and those found around the ravines of Fago and Biniés. Raptors such as Griffon Vulture, Golden Eagle, Peregrine Falcon, Egyptian Vulture and Eurasian Eagle Owl are all to be found in these areas, where rock is the predominant feature. Other birds such as Red-billed Chough, Wallcreeper, Rock Sparrow, Rock Thrush and Blue Rock Thrush and Alpine Swift also nest in these areas.